3 Creative Ways to Explore Culture through Music in Spanish Class 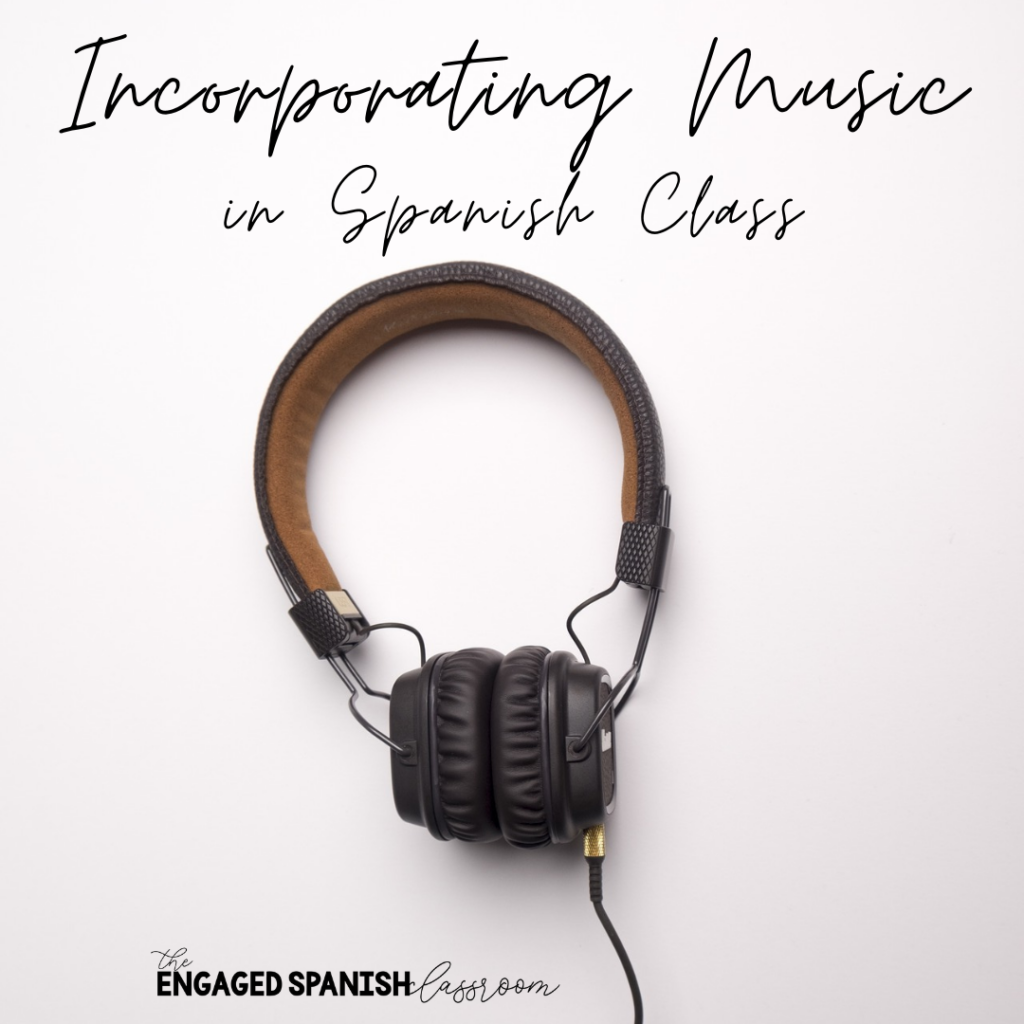 I absolutely love using music every day in class. I think music is a great jumping point for cultural discussion and comparisons, simple cultural exposure, and often vocabulary and grammatical connections as well. Sometimes, it’s just fun. The other benefits are a bonus!

There are so many ways to work music into your class daily. There are some time-consuming but valuable ways, and there are quick and seamless ways that are also valuable. For me, I like to try a little of everything. Just hearing music every day makes me happier. Happy teacher = happy class, right? 😉

Some ideas are a bigger commitment, but worth it! Last year, my classes participated in two music competitions:

My entire department actually banded together for the first music event, Manía Musical. We purchased multiple license of Mis Clases Loca’s music materials, so that we could all participate with our classes. There were around 10 of us! We all had our students vote in the same Google Forms throughout the competition, and each round received between 700 and 800 votes! We had a huge competition bracket (like a sporting event playoff) in the hallway outside my classroom, and students from all grades would stop by during the day to see who was winning. It was awesome for community building and enhancing interest/engagement between all levels of our classes. This first competition was in November, and I loved building interest and hype toward the beginning of the year like that.
The second music competition of the year, in March, I ran just between my own classes. My students even decided that they didn’t want to vote in the worldwide competition; they wanted to vote solely amongst themselves. I let them make this decision, and it went really well! Some students would even go above and beyond and vote twice per day; they voted with our class, but also logged into Señor Ashby’s site to join the worldwide vote. Our class matched the larger competition *almost* all the way until the end!
To stay within the curriculum during these music competitions, I make sure my students know they are responsible for a warm-up during the music video and voting. If possible, I make the warm-up connected to the song/country/artist. After we have seen the video and heard the song a few times (so once we are done the first round of the songs), my warm-ups are more content based // connected to our current unit. Since my students have already heard the songs and seen the videos at that point, I don’t feel bad asking them to do a quick vocab matching activity, puzzle, or other warm-up as the music plays. My department head really liked this as well, as it integrated the competition seamlessly into our typical daily routine.
I absolutely plan on hosting at least one music competition this year as well. My students really enjoyed how many songs they were exposed to in a short amount of time!

You don’t necessarily need a big competition to integrate music into your classes!

Sometimes you aren’t able to adjust your curriculum enough to do a three-week music competition, and I get that. But please do keep in mind, they can be done during your warm-up time and they do help build community if you ask me! BUT, if you aren’t interested in that commitment, you probably want a more seamless way to integrate music.
After the music competitions last year, my students were always requesting music. They had multiple favorites from both competitions, and I wanted to find a way to expose them to these different styles as much as possible. Here are a few ways I integrate music without taking up any class time:
If you want to see the Spotify playlist I use during any of the above mentioned times… you can find it right here! I teach high school, and I am fairly careful about what I play // add to this playlist. That being said, please always preview songs and make sure you are comfortable playing them for your students 🙂

Music with culture and grammar in mind

Sometimes, heaven and earth collide in a shower  o f        s   p   a   r   k   l   e  s   and I find a song that matches perfectly with one of our units. This means that I get to stay on-content, but sneak in some extra cultural exposure as well as extra teacher-shoulder-dance-time. (Picture me standing on the side of the room, smiling wildly and bouncing my shoulders to the music. YEP.)
When this glorious event happens, I try to squeeze as much out of the song as I can. That means we do as many things as we can from the following list:

And then tomorrow, students ask to hear the song during the warm-up. And my heart shines.

I have made various activity packets for my favorite songs that match the units I teach. Here are some examples of my favorites! Each one is connected to the grammar or vocabulary of the unit, while also including the culture of the artist and country.

You can also find a bundle of all of my available Culture and Grammar through Music packets right here.

Thank you for reading!

I hope these ideas help you find a few new ways to incorporate music this year in your classes! Good luck and have fun! 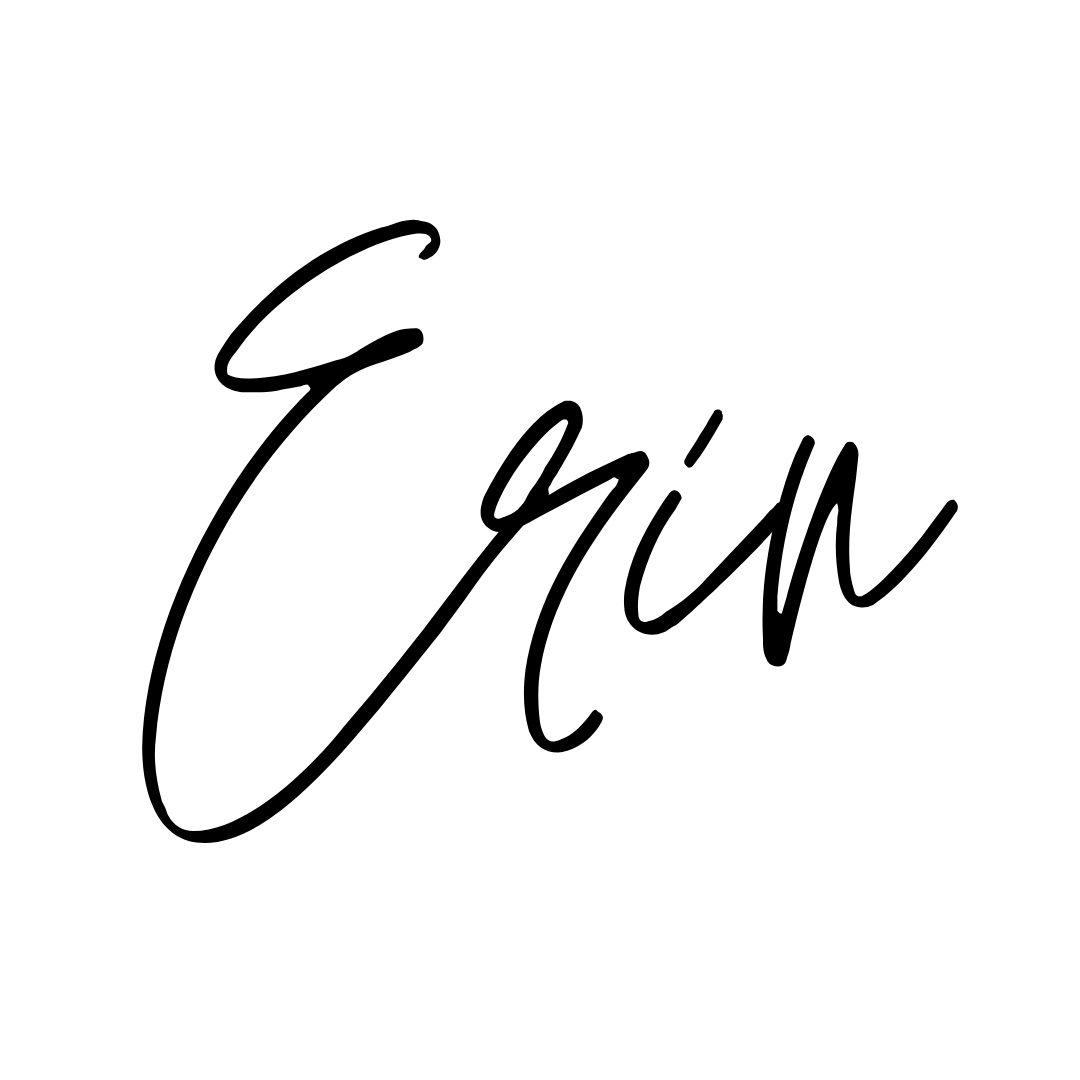 Looking for more ideas to try? 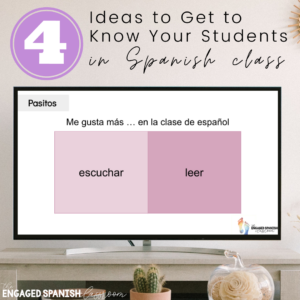 Inside: 4 Activities to help you get to know your students during the first week of class! 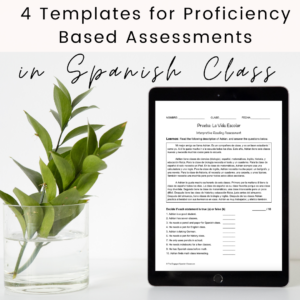 Inside: Strategies and examples for using proficiency based assessments in the World Language classroom 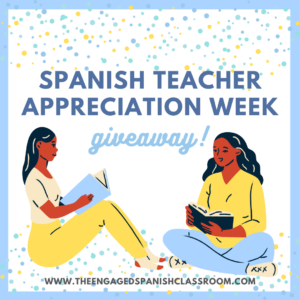 Inside: the chance to win four TPT giftcards! 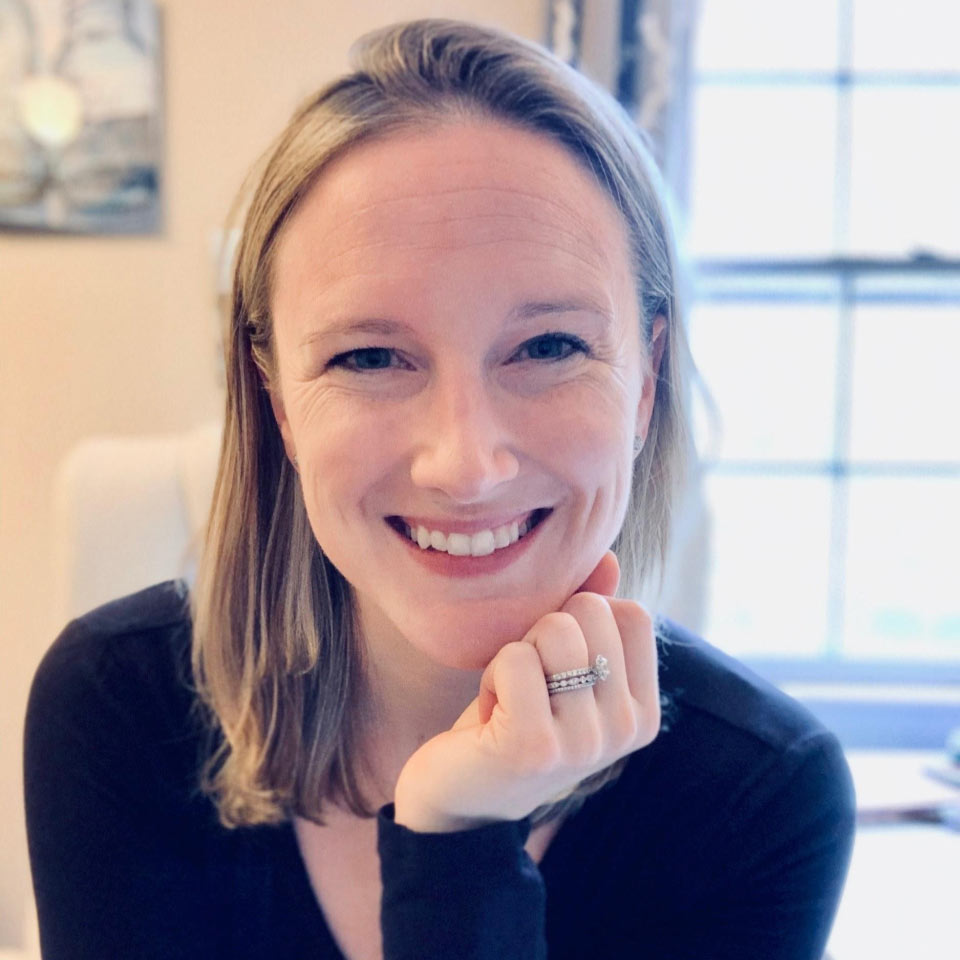 My name is Erin and I have 8 years of experience teaching high school Spanish. I love building positive student relationships and bringing a bit of fun into my lessons to keep my students engaged!

4 Templates to Support Proficiency Based Assessments in Spanish Class

Menu
La Silla Caliente 💥🔥 has always been one of

✨New✨ PASITOS Resource! This is the perfect i

No no I swear I’ll start grading in TEN minutes

I love to see how your students are enjoying Sonid

Lots of love lately in the reviews for Taco Tuesda

Hi my name is Erin and I hate that teachers often

Looking to mix up your week?👀 You’ve got this

I used to think I needed to say YES to everything

© 2020 THE ENGAGED SPANISH CLASSROOM  | SITE BY LAINE SUTHERLAND DESIGNS
I use cookies on my website to give you the most relevant experience by remembering your preferences and repeat visits. By clicking “Accept”, you consent to the use of ALL the cookies. You can view my Privacy Policy here.

This website uses cookies to improve your experience while you navigate through the website. Out of these cookies, the cookies that are categorized as necessary are stored on your browser as they are essential for the working of basic functionalities of the website. We also use third-party cookies that help us analyze and understand how you use this website. These cookies will be stored in your browser only with your consent. You also have the option to opt-out of these cookies. But opting out of some of these cookies may have an effect on your browsing experience.
Necessary Always Enabled
Necessary cookies are absolutely essential for the website to function properly. This category only includes cookies that ensures basic functionalities and security features of the website. These cookies do not store any personal information.
Non-necessary
Any cookies that may not be particularly necessary for the website to function and is used specifically to collect user personal data via analytics, ads, other embedded contents are termed as non-necessary cookies. It is mandatory to procure user consent prior to running these cookies on your website.
SAVE & ACCEPT